I dreamt about owning a Doxy Die Cast for at least a year before I finally took the plunge and bought one. I'm someone for whom external clitoral orgasms don't come easily and after hearing the magic words “More powerful than the Magic Wand” I spent long hours fantasizing about the Die Cast.

With limited options in Canada without a bajillion dollars in shipping (though of course, once I got mine, Come As You Are started carrying the gorgeous red one I REALLY wanted), I ordered the white one. I was a little sad but my Magic Wand is white, so it's not like I was changing much. Opening the heavy box to discover the padded storage case, I knew I was in for something different. I was delighted to discover that the finish was actually a beautiful sparkly unicorn white. I was instantly smitten.

The wand is large and heavy and the metal casing is cool to the touch. The black silicone head and neck are non-porous so they're body safe and easy to clean. The Die Cast comes with an extra long 10′ cord, so although you need power to run it, you've still got a lot of flexibility of movement. There are 3 light up buttons on the shaft. One for power, one for increasing, and one for decreasing through the 4 speed settings. Pressing and holding the power button gets a variable speed vibration with a cycle length that you can speed up or slow down with the up/down buttons.

So how did it do on testing? This is an amazing, deluxe toy! Its deep rumbling vibrations got me exactly where I needed to go. The large head delivered the vibrations throughout my vulva and deeper clitoral tissue. When pressed it hard against the bones of my pelvis I was able to have the kinds of orgasms previously only achieved by my Magic Wand. I've had more than one epic laugh/crygasm using my Die Cast.

The buttons are a little challenging for me since I use wand toys primarily while lying on my stomach. I often spend a bunch of time spinning it trying to find the buttons, then counting buttons up and down to figure out which one to press. Because of a hereditary tremor, my shaking hands sometimes start up the variable setting when I'm turning the toy on. I also find it strange that the toy stays at whatever setting you were using before turning it off. I want to reset to zero with each session, so I have to press the down button every time I turn it on until I get to the lowest vibration setting.

The Die Cast is also heavy (830 grams or 1.8lbs)! People with difficulty lifting heavy things or manipulating long, heavy objects with their hands might not be able to comfortably operate this toy. Speaking of heavy, I can also assure you from unexpected testing that the large AC plug hurts like a motherfucker if you drop it on your toes. 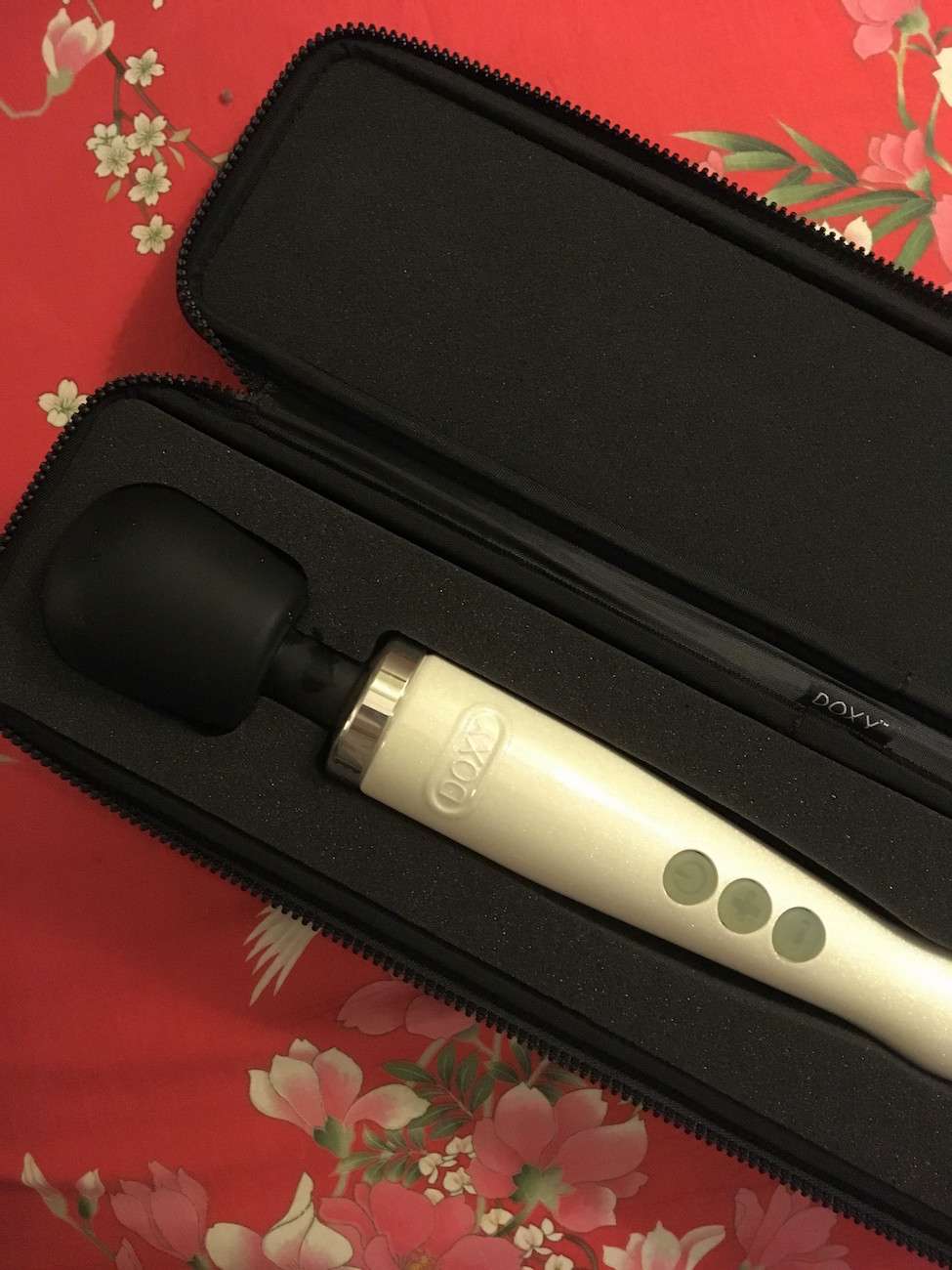 Is the Die Cast by Doxy a toy worth owning? Unequivocally, yes!

Is it worth replacing your Magic Wand with a Die Cast or buying the Die Cast instead? I don't know that I can vote yes on this. The Die Cast is an incredible piece of workmanship and beauty, and the price point reflects that. I can't say for sure that my orgasms are any better or quicker than they were with the cordless Magic Wand, which is more affordable. If the Vibratex wand isn't strong enough for you, the Doxy could be your answer. And if the Die Cast is in your price range and you're looking for a beautiful, high-quality wand massager, I'd say go for it!