We are fans of our hands. It seems obvious, but our hands are the most versatile sex toys we have. With patience, care, imagination, and stamina they can do nearly anything any other part of our body can do, and almost anything a toy can do,

…except vibrate at high speed.

Over the years we’ve tried countless finger vibes and we’ve found quite a few to be anywhere from awful to useful to surprisingly good but most of those finger vibes were also pretty basic. Some vibes focus on being discrete, some on intensity, some focus for some reason on patterns, and some focus on applying pressure specifically via the tip or the body but a place where we really haven’t seen focus is on usability.

The DiGiT by Hot Octopuss attempts to address these areas of focus by addressing them all.

Use code SWINGSET20 on the Hot Octopuss website to receive 20% off your purchase! 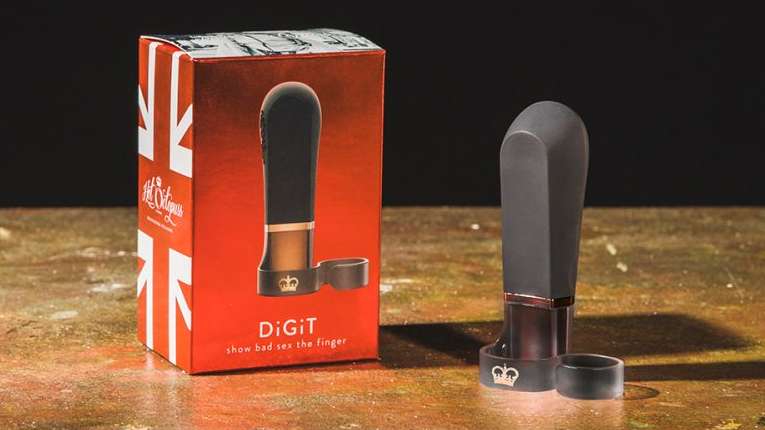 The DiGiT is a little longer and wider than a thumb and it’s made from medical grade silicone and polycarbonate plastic, but the obvious selling point of the DiGiT is the finger grips. The DiGiT has two curved finger holes with which to grip, balance, and hold down the vibe. It seems like it should be a pretty basic idea but the grip is arranged in an open figure eight that allows it to expand just enough to accommodate larger fingers while maintaining enough pressure on smaller fingers for stability and to apply leverage. The grip allows for using the vibe both underneath the fingers and on top of the fingers. It’s a surprisingly elegant design that works well while looking sleek and distinct.

The part of almost all sex toys that fails us is the user interface; we usually use that term for software, the “UX” as it were, but it truly feels like the right way to describe the way we interface with anything. We offer instructions to the toy and it either understands what we want or not, and while every toy has its own visual and input language the bottom line is:

The DiGiT hits all these … *cough* … buttons. When used as intended and pictures (behind the second knuckle and underneath fingers) the DiGiT’s button scheme is simple. Turn it on by pressing the on button for two seconds with the button on the right side. Change between patterns by pressing the same button. When fingers are in the grips, use the thumb on the hand using the DiGiT to increase or decrease the intensity and speed of vibration. By moving the power and vibration button to the opposite side of the speed and intensity buttons it eliminates the chance of accidentally turning the vibe off or introducing a pattern or changing between patterns. It’s a simple idea that many toys don’t apply and it seriously sets the DiGiT apart.

When underneath fingers the DiGiT allows for easy and precise application of pressure to genitals in almost every body arrangement. If you’re laying next to your partner while making out with them the digit offers easy access to vulvas, cocks, and with some imaginative positioning or long arms, the anus. If behind the partner it allows for the same but from different angles without needing to stretch. It’s easy to use when positioned underneath / in front of a partner’s genitals and when used on top of fingers allows for easy access to the anus with the thumb. Most importantly it can be manipulated with a single hand.

The finger grips on the DiGiT maintain grip so well that, when paying attention to a partner, allow for subtle movement that changes the application and location of pressure with very little fussing and without, lets say, visual confirmation. It allows for keeping track of where you are since the fingers not in the grip can continue to maintain contract with whatever part of the body they’re on. The finger grips can also be applied in front of the second knuckle in addition to behind the second knuckle with a little extra attention and when fingers are applying pressure in different directions. This allows for an extra inch or so of reach which makes an enormous difference.

With vulvas the DiGiT slids in between labia easily. The finger grips allow for versatile application of pressure to the clit with both the tip and the arch of the body, while still offering interesting access to the vaginal opening. With cocks it allows for the application of pressure along the shaft with ease since when a hand wraps around a cock, the DiGit lays on the cock. It does apply pressure better then used along the length of the cock as opposed to across the cock as the body of the DiGiT is stiff while being soft. It is the only finger vibe we’ve used that allows us to still use a single hand on a cock while using the vibe. When used around the anus it allows for other fingers, mostly the thumb, to slide along a vulva or a cock. The DiGiT unexpectedly and wonderfully allows for both vaginal and anal penetration, with a single hand, while alllowing the thumb to penetrate and stimulate the opposite. Its that ability to allow for other fingers to continue play that really set the DiGiT apart from other finger vibes.

The DiGiT has five speeds that can be applied both to straight vibration and patterns. At the lowest speed the DiGiT maintains a surprising rumble intensity. At its highest speed it’s maintains that intensity without feeling out of control. While the speed isn’t exceptional on its own the DiGiT doesn’t feel out of control due to the grips. It’s a combination of factors that allow for close and consistent pressure and intensity.

…and hey it’s quiet. The DiGiT is quiet, especially when used underneath fingers. It allows for discreet play sessions and play sessions that don’t distract from the wonderful noises people make.

The DiGiT, being made out of medical grade silicone and polycarbonate plastic is non-porous and waterproof. While this is not a toy to throw in a pot of dildo soup it’s very easy to clean between play sessions and between people. We use extremely hot water with anti-bacterial soap and after, isopropyl alcohol. The alcohol evaporates fast and does not degrade the material and is therefore a consistent part of our play kits. The seam between the silicone and the PC plastic… well it’s seamless. While it’s obvious the DiGiT has a seam it’s so well put together that with thorough cleaning it’s usable with multiple partners.

The DiGiT really surprised us with its versatility, innovative finger grip, and ease of use. It’s well constructed and looks attractive. It’s quiet and is small enough to put along side a couple of condoms and a packet of lube. We consider it a hard buy, and while Hot Octopuss sent both Ginger and Dylan review units, it doesn’t hurt that the MSRP of the toy is a modest and grin-worthy price of $69. It will replace your other finger vibes. It’s definitely replaced ours.

You can find the DiGiT at the Hot Octopuss website. Use discount code SWINGSET20 to save 20% off your purchase!